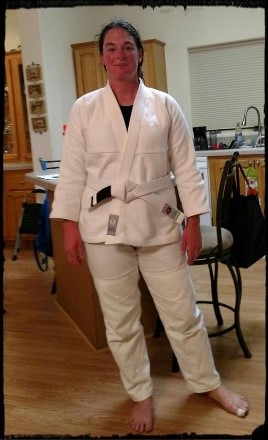 I’m one year into my journey to discover a new, more healthy me. This means I’m pretty much a toddler when it comes to my knowledge of healthy living. Like many others, I’ve tried several diet and exercise plans that ultimately failed before I hit upon success. When AF asked if I would write a blog post about my experiences and what I did to keep focused for the long haul. I wasn’t sure how my experiences or the lessons I learned along the way could help someone else. After all we are all different. We have different goals, different things motivate us, and what works for me may not work for you. However, I may have found somethings that translate, and here they are. Like so many others this was not my first time trying to lose weight. I tried and failed several times over the years. I pretty much had excepted the fact that I was fat, and was going to stay fat, because changing that was too hard. I just didn’t have enough will power and determination in me to be successful in the long term.

Then I had a motivational moment. I call it my Malibu Moment, because it happened when I was hit by a Chevy Malibu while crossing the street one day. That moment changed everything for me. After that I wanted to be healthy, I wanted to be strong, I wanted to live a good fulfilling life for as long as I could. Like most I knew some basic concepts about losing weight, eat less, exercise more. So I started out as many start out, counting calories and hitting the cardio machines. I had followed this basic idea before doing exercise videos at home and limiting my food. However, I would ultimately leave my lofty ideas behind in favor of pizza, beer, and chocolate. I needed this time to be different. So I joined a gym. It’s something I had not done before and day one at the gym I pretty much felt like Carrie at prom.

It turned out to be the first in many good decisions I have made over the last year. Initially I found others at the gym to be a large cause of stress, especially the trainers. I’d be on the elliptical sweating it out and if one walked by I’d think they were secretly judging my probable improper use of the machine and my general state of unhealthiness.

In the past fear, self-doubt, and anxiety had held me back over, and over again. Fear of how hard it would be to lose weight compared to how easy it would be to not change. My lack of knowledge about what foods were the best to eat, and finding it easier to just eat the same things that I knew I liked. The anxiety associated with admitting to someone that I did not know what I was doing and needed help. I had to put those fears aside. I let my determination to succeed lead the way and tried my best to keep a lid on all those fears. I signed up for nutrition consultations, I followed the advice given. I took fitness classes and found the support of my classmates to be a great boost to my self-confidence.

I signed up for the Passport to Fitness Challenge that AF was holding. Through this program I met all the trainers and gathered several tidbits of wisdom that I was able to incorporate into this undertaking.  Some ideas that I went back to time and time again were to surround yourself with positive people, let your friends and family know what you are trying to accomplish so they can build you up. If someone puts you down or expresses doubt about your ability to attain your goal, it might be time to leave that person behind. Don’t compare your progress to the progress of others, set goals, set rewards, and don’t fall off the wagon even when you are hanging on by your fingernails drag yourself back up! I soaked this all in and took it to heart. I made a goal sheet that had specific individualized goals. For example I could seriously not do one single straight leg push up when I started out. I would just lay on the ground and not be able to lift myself up. So on my goal sheet I put “do one straight leg push-up” I checked in with myself every couple days to see if I reached any of my goals. When I reached one I marked it off the list. One day at a time, one step at a time, one goal after another was marked off my goal sheet. Three months later I won the Passport to Fitness Challenge.

The challenge was over, but I was far from done. I had decided at the beginning this was a forever change not another success followed by gaining all the weight back. I had reached most of the goals on my old goal sheet so I made new goals. I’m still setting and marking off goals. Today I marked off the goal of doing twenty straight legged pushups.

That brings me to the most important turning point in my journey. The reason why I’m still striving to be better, stronger, braver and healthier. After six months of classes at the gym, after six months of endless stair stepper workouts, endless miles on the elliptical and running no where on the treadmill boredom starting seeping in. I found myself switching from one group class to another trying to find something. The perfect instructor? The perfect work out friends? The perfect time to take a class? I remained motivated and enjoyed all the classes I took, the instructors, and my work out buddies. But, I was getting bored and feared I would stop going to the gym all together if I didn’t find what I was looking for. What was I looking for?  I was looking to find the flow in my exercise routine.

I was looking for a healthy exercise or activity that I felt fully immersed in. Something that would give me a feeling of energized focus, full involvement, and something I enjoyed. I stumbled upon my flow exercise in a sort of random way after walking downtown one night and seeing a Jiu Jitsu class in progress. Finding my flow activity was a game changer for me. Working out was no longer a task that had to be completed in order for me to not feel guilty when I ate some extra carbs (in the form of pizza and beer). I suddenly wasn’t just exercising for the sake of exercising. I found an activity that was healthy for me, burned plenty calories, gave me a sense of energized focus and had fully sucked me in. I would not have tried Jiu Jitsu before first accomplishing the mental and physical transformation that happened at the gym. I would not have had the guts to walk into that door. And I would not have had the strength to participate in this sport previosly. If I went back in time and told pre Malibu Moment me that in one year I would lose 55 lbs. be stronger at 41 than at 21 and find a love for Jiu Jitsu; I wouldn’t even know where to start with all the things that didn’t make sense with that statement.

I can’t stress how much getting into the gym, setting goals, and seeking and following the advice of those that could help me reach those goals changed my usual routine of success/failure/give up, to success/success/success. Also, after I reached my weight loss goals and felt the boredom seeping in I can’t stress enough how much finding an activity that I truly loved to do, and wanted to do over and over again changed my trajectory from a slow return to the status quo to triumph. I feel confident that if I didn’t find my flow activity I would have burned out on the gym. After I stopped exercising my eating would have suffered next. I would have been right back at square one, or worse.  If your goal is a lifelong commitment to fitness you need an exercise or activity that gives you a feeling of energized focus, something you enjoy, and you will want to come back to over and over again. I now view the gym as the tool I use to get better at my chosen activity. I use the gym to get stronger, faster, and more flexible, so I can apply that to my outside gym activities. Keep strong everyone, you got this!

Is a paralegal at the coolest criminal defense law firm in Laramie; Neubauer, Pelkey, Merseal and Goldfinger LLP. She’s lived in WI, PA, MA, AZ and the great state of WY. Robin loves camping, hiking, fishing, pizza, beer, and Jiu Jitsu (not necessary in that order). Robin was the winner of Altitude Fitness 2018 Fitness Passport Challenge and is now spending and inordinate amount of time at Third Way Jiu Jitsu in Downtown Laramie.